A new study from the Interstate Policy Alliance (IPA) and Palmetto Promise Institute (PPI) concludes that South Carolina is in a prime position to benefit from new oil and natural gas production in the South Atlantic Outer Continental Shelf (OCS). The study also factors in potential environmental impacts.

Investment in offshore oil and gas development in South Carolina would be both direct and indirect. Direct investments would include the purchasing of capital equipment, engineering services,construction services, and other services from nationwide, state and local companies. Those companies would then stimulate indirect investments down the supply line. These investments would create employment and income for households which would in turn mean more spent on more goods and services for local merchants. 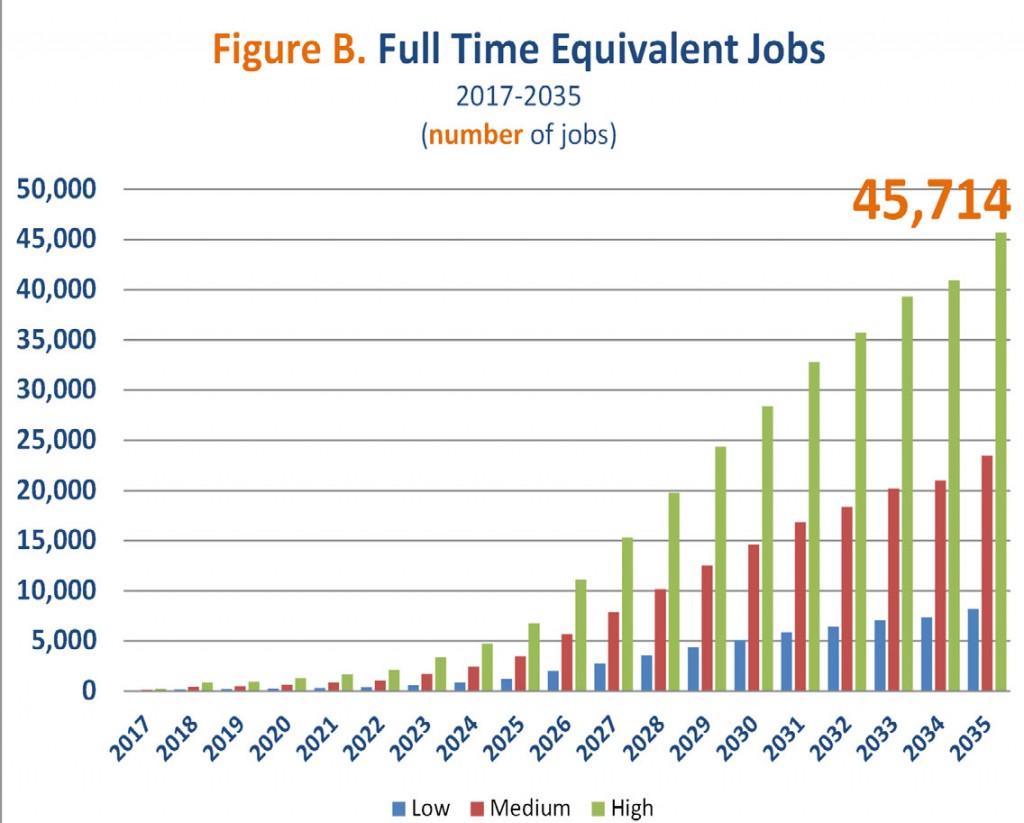 “The study finds that expanded oil exploration and drilling could bring as much as 2.7 billion dollars of direct investment to SC as well as up to 45,714 new jobs for South Carolinians.”

The state government of South Carolina is projected to see a windfall as well. These revenues would come in the form of oil and gas lease and royalty payments, particularly after production gets underway after 2030. A substantial state and local tax stream would also be generated. At high output, and assuming a decade or so of production, the State of South Carolina would be earning $848 million in mineral lease payments and royalties plus $127 million in taxes, for a total of nearly $1 billion by 2035. 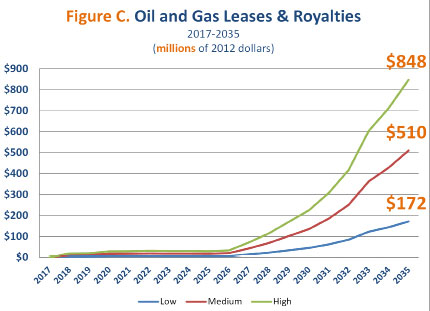 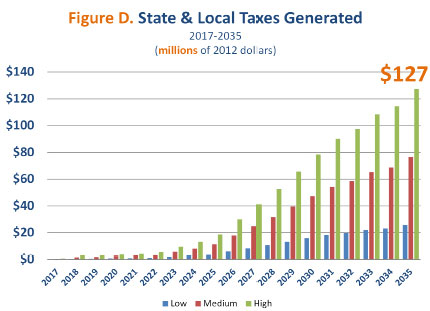 The IPA/PPF study offers an innovation over previous studies by accounting for “social costs” as well. Higher greenhouse gas emissions could come with the increased supply (and lower prices) represented by this new cache of energy resources as well as potential for environmental damage due to spillage and other accidents. All of these externalities are included in the model.

A recent survey of South Carolinians indicates that 77% of our citizens support offshore energy exploration. Our study shows that the ratio of benefits to costs far outweighs possible potential risk, and concludes that South Carolina could be the second biggest beneficiary of the Atlantic-based energy boom. The question: if offshore opportunity knocks, will South Carolina be ready? 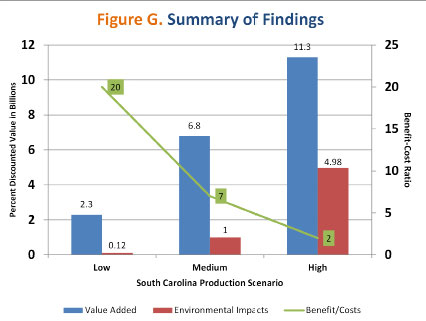 Q1. Why is the offshore discussion timely?

On July 18, 2014 the federal Bureau of Energy Management (BOEM) announced it was “setting a path forward” to allow for new surveys of the Atlantic Outer Continental Shelf (OCS) to update the incomplete 40-year old data currently in use. This advanced seismic mapping is environmentally safe and will yield a far more accurate picture of offshore oil and natural gas reserves than what we currently have.
With the concurrent development of BOEM’s newest “5 Year Plan” for offshore activity in the OCS,this timeline could present a significant opportunity for job creation and energy development in South Carolina, perhaps as early as 2018.

While America is producing more and oil and gas than in years past, with major problems in Russia, South America and violent unrest in the Middle To read the full report, visit OffshoreOpportunity.com East, we are still too dependent on foreign oil. Meanwhile, we ignore 87% of our own offshore acreage and due to outdated maps are not even sure what is out there. To be truly energy independent, we must maximize the areas of exploration to improve the odds of finding secure resources.

No, oil rigs would be well beyond sight lines from the beach — 75-100 miles offshore. South Carolina’s scenic beauty would be preserved intact, with major onshore infrastructure centering around existing development, such as our ports.

Q4. What about the danger of a spill like the Deepwater Horizon disaster?

While environmental risk is never entirely out of the question, a Deepwater Horizon-type incident is highly unlikely. In addition to continuing improvements in technology since then, the Deepwater Horizon rig operated 5,000 feet below the surface. This is a far different environment than South Carolina where operations would be in much shallower waters. This, along with vast coastline, is why South Carolina is in such a favorable position. The Considine analysis finds the likelihood of environmental damage unlikely and well worth any potential risk in his formal cost/benefit analysis.

Q5. Some experts say there isn’t any oil off the coast of South Carolina, so is mapping a waste of time?

The same arguments were made about the presence of oil in the Gulf, and those estimates were off by a factor of 5:1 (9 billion barrels projected vs 45 billion actual). Dr. James Knapp, a Professor in the Department of Earth & Ocean Sciences at the USC testified before Congress that estimates he has seen on South Atlantic oil and gas from Quest Offshore Resources appear to be very conservative (low).

Download the Full Report. The judiciary of the United states is the subtle corps of sappers and miners constantly working under ground to undermine the foundations of our confederated fabric.  A judiciary independent of a king or executive alone, is a good thing, but independence of the will of the nation is a solecism, at

An Education Freedom Agenda for 2021

Effective Education for Every Student These 19 recommendations are drawn from the Palmetto Promise Playbook report. You can view our 2021 policy agenda for other issues by clicking below. Energy  | Healthcare | Tax & Budget | Work, Justice, & Quality of Life EXPAND EDUCATION CHOICE Adopt an Education Scholarship Account (ESA) law that will provide

A Healthcare Freedom Agenda for 2021

Affordable, Quality Care for Patients These 16 recommendations are drawn from the Palmetto Promise Playbook report. You can view our 2021 policy agenda for other issues by clicking below. Education | Energy  | Tax & Budget | Work, Justice, & Quality of Life         REGULATORY REFORMS Eliminate Certificates of Need (CON) to