But that’s not the case in the Palmetto State.

Economists at Miami University (OH) and Trinity University used data from the U.S. Census Bureau and other sources to conduct a study of South Carolina public employees for the Palmetto Policy Forum.1 Their analysis found that unionized public sector employees in the state earn 4% less in total compensation than their non-union public sector counterparts. Translation: Unionized government workers in South Carolina are actually being penalized for paying union dues.

The following chart (Figure A) shows how union membership affects total compensation in the United States,South Carolina and North Carolina. 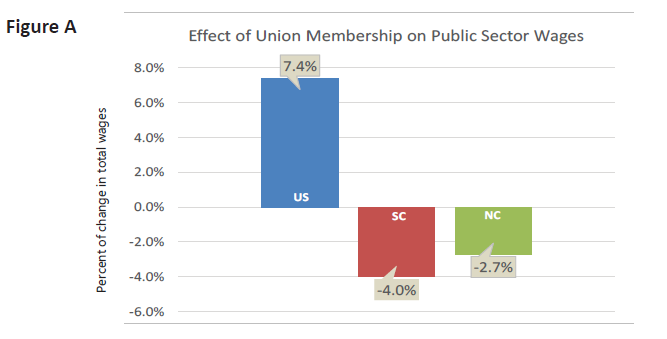 The full statistical analysis on the reverse side of this page shows the penalty is even greater for college-educated public workers, who take a 5.3% total compensation penalty for working under a union-negotiated collective bargaining agreement, and a 6.4% penalty when only considering their wages and salary (excluding benefits).This penalty is of a similar level in the Tarheel State, where college-educated unionized public workers are collecting 4.7% less than their non-union counterparts. In their study, the economists also controlled for work experience, type of occupation, hours worked, other income, and demographics.2

Public workers operating under a union-negotiated contract in South Carolina are hit twice by the unions claiming to represent them: First by paying to join the union, then again with overall lower compensation. So if the unions are unable to back up their claims of better pay and benefits, this begs the question: What exactly are South Carolina’s public sector unions doing with their members’ dues?

Figure B shows the “Union Premium” for the United States, South Carolina and our neighboring states of North Carolina and Georgia. The United States and Georgia follow the typical pattern: public union membership means a “premium,” slightly more in Wages & Salary and Total Compensation. This is not true for South Carolina or North Carolina. Sample sizes are small, but “t” tests show a robust statistical connection between lower Wages and Total Compensation and public sector union membership.

Figure C digs deeper into the union question based on the demographic of Education Level. Again, the South Carolina reality turns conventional wisdom on its head. Those who attain a college degree (College Grad) are penalized to a more signifi cant degree for their union membership than less educated employees (Some College or High School or less). 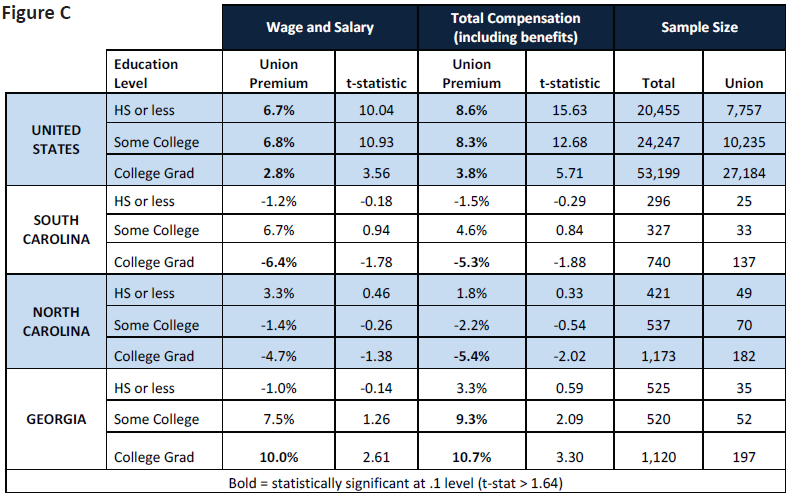 2.Demographics include sex, race, marital status, and urban/rural residence. The economists note that these controls match those used in several other studies of the union differential in compensation.

Download the Full Report. The judiciary of the United states is the subtle corps of sappers and miners constantly working under ground to undermine the foundations of our confederated fabric.  A judiciary independent of a king or executive alone, is a good thing, but independence of the will of the nation is a solecism, at

An Education Freedom Agenda for 2021

Effective Education for Every Student These 19 recommendations are drawn from the Palmetto Promise Playbook report. You can view our 2021 policy agenda for other issues by clicking below. Energy  | Healthcare | Tax & Budget | Work, Justice, & Quality of Life EXPAND EDUCATION CHOICE Adopt an Education Scholarship Account (ESA) law that will provide

A Healthcare Freedom Agenda for 2021

Affordable, Quality Care for Patients These 16 recommendations are drawn from the Palmetto Promise Playbook report. You can view our 2021 policy agenda for other issues by clicking below. Education | Energy  | Tax & Budget | Work, Justice, & Quality of Life         REGULATORY REFORMS Eliminate Certificates of Need (CON) to