Rapanos v. United States (2006) will go down in history as an egregious case of federal over-reach. Even now, nearly nine years later, the regulation it has spawned could cost South Carolinians jobs, income, and economic growth. Based on Rapanos and its expansion of the federal Clean Water Act (1972), the federal Environmental Protection Agency (EPA) and Army Corps of Engineers have proposed rules that have been aptly labeled a “war on coal.”

According to the rules, coal–fired electricity power plants, which provide 29% of electricity generation in South Carolina, would be dramatically limited in their Carbon Dioxide (CO2) emissions. There are also new rules for existing plants, new plants, and mercury emission. The rulesare so aggressive plants would need to be closed or adopt expensive or unproven technologies such as carbon capture and storage to be in compliance. 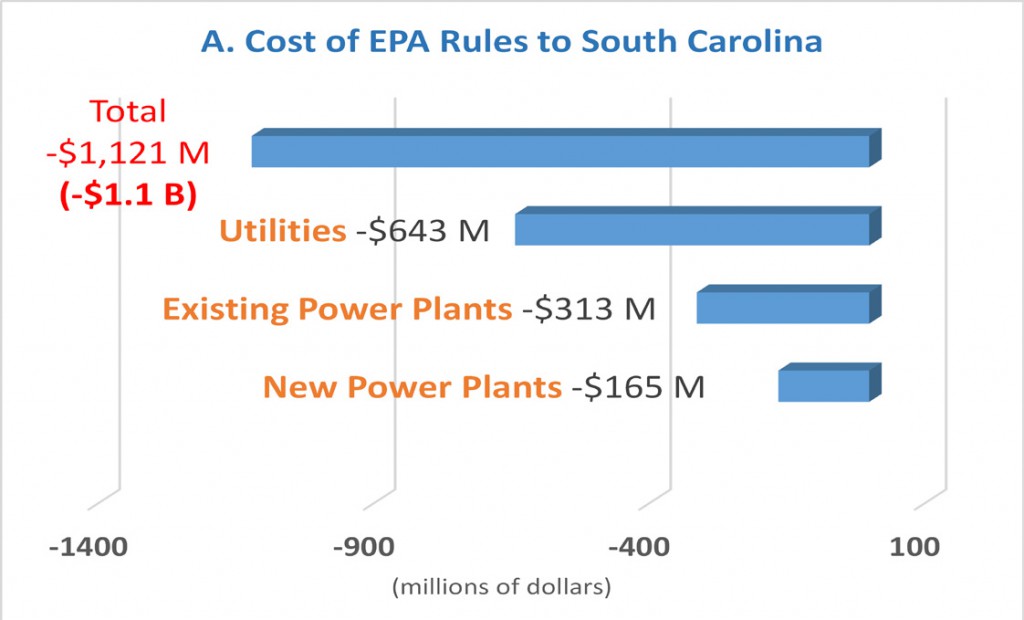 As indicated by Figure A, by 2030 the CO2 rule will cost new power plants $165 million and existing plants $313 million. The mercury rule will cost $643 million.That’s $1.121 billion dollars, driving up electricity prices by 1.98 cents per Kilowatt hour—a 22% increase for South Carolina rate payers.

As Figure B and C show, there is fallout for the economy as a whole as well. 14,650 jobs are expected to be lost due to businesses paying higher energy prices, stranding investments of $181 million and reducing the disposable income of South Carolinians by $1.6 billion.

Palmetto Promise Institute will continue to track EPA and Corps actions. This edition of Fast Facts is a summary of The Economic Effects of the New EPA Rules on the State of South Carolina produced in collaboration with The Beacon Hill Institute at Suffolk University, and the Interstate Policy Alliance.

Testing: Our Responsibility to Know

How can we move forward as a state to support students, parents, and teachers if we don’t even know for sure how students are doing?