South Carolina was one of 19 states to firmly resist the pressure to expand Medicaid under Obamacare. At the time, Palmetto Promise Institute’s Top 10 Reasons Medicaid Expansion is Bad Medicine for SC and Unaffordable Care Act outlined the debate. Now, with the future of the Obamacare Medicaid expansion central to the “repeal and replace” debate in Washington, it’s worth a review of the expansion’s critical defects.

Created as a program to assist low-income children, the elderly and disabled, Obamacare first attempted to mandate – and then incentivize – states to expand the program to subsidize working aged, able bodied adults. More people on the Medicaid rolls created a classic example of how Washington strains state budgets.

Even before Obamacare was enacted, Washington pressured states to loosen the eligibility requirements to allow more people access to Medicaid coverage. The result: more people on the rolls…and an ever-growing budget line item

After Obamacare became the law of the land, Washington pressured states to implement the law partly by expanding Medicaid further. Remember, coverage was the stated goal of the Affordable Care Act. Instead of reserving Medicaid for those that truly need it, states were pressured to cover new individuals via Medicaid, even if it meant transforming Medicaid from a true social safety net, to a quasi-government run insurance market. The result: more people on the rolls…and an ever-growing budget line item. 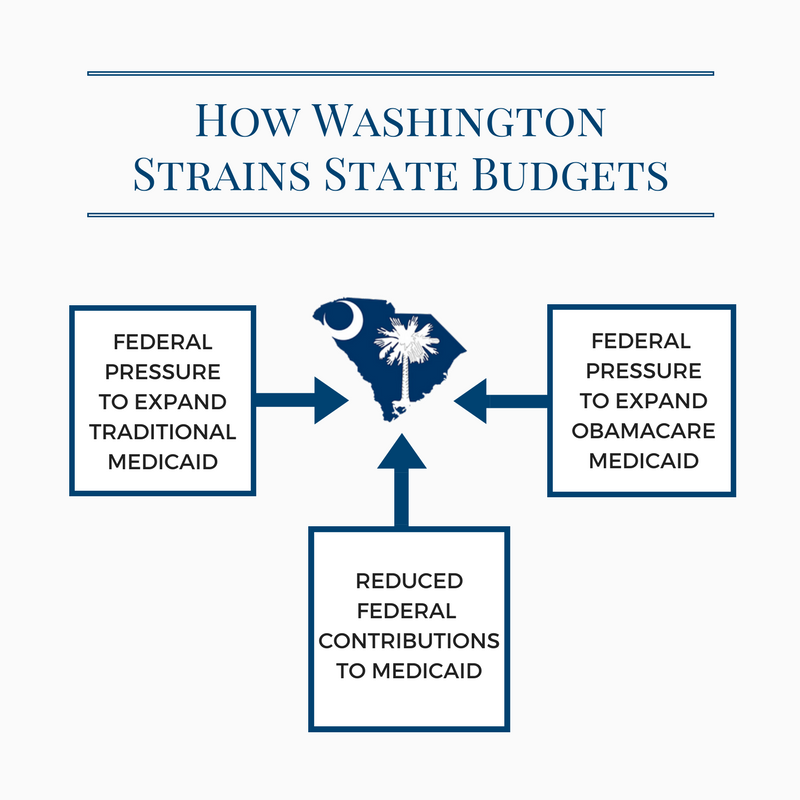 The third leg of the stool involves reduced federal contributions to Medicaid. It is true that had South Carolina expanded Medicaid, the state would have received additional financial aid from the federal government to pay for the increased enrollment.  But only for a time. In state after state, enrollment projections and new enrollee costs were several underestimated.  And now many states are scrambling to try to fill the hole in their budget.

Visiting Fellow, Chris Jacobs sums it up this way:

“The combination of higher-than-expected enrollment and higher-than-expected enrollee costs has created a “double whammy” for state budgets. While the federal government paid 100 percent of the cost to cover Obamacare’s Medicaid expansion population for the law’s first three years, states must contribute 5 percent of costs for the newly eligible beginning in 2017, rising to 10 percent by 2020—a share proving larger than expected, and one placing fiscal strains on states.

With the new entitlement costing much more than expected, states may have to cut other critically important spending priorities to continue funding Obamacare’s expansion of Medicaid to able-bodied adults. In Kentucky, costs for fiscal years 2017 and 2018 are now estimated at $257 million—more than double the original estimate of $107 million. As a result, education, transportation, corrections, and other priorities will receive $150 million less from the state budget. Ohio’s budget for Medicaid expansion more than doubled from the $55.5 million originally projected, likewise robbing other important state spending programs.”

The result of reduced federal contributions to Medicaid: more people and a larger budget line item.