One of President Ronald Reagan’s most enduring legacies is the collapse of the Soviet Union. How did that happen…and what lessons does it hold for today?

“We spent the Soviet Union into collapse,” said Dr. Arthur Laffer in a recent talk hosted by Governor and First Lady McMaster at the South Carolina Governor’s mansion. As part of President Reagan’s inner circle of advisors, he had a front row seat to see that history unfold.

Applying that principle to the threat we currently face from North Korea, Dr. Laffer proposed that a strong and growing economy is still the single best bet to support a robust military to deter when possible and defend when necessary.

The most meaningful snapshot of America’s economic health is GDP (Gross Domestic Product), and according to Dr. Laffer, our national GDP is at its lowest inflation-adjusted average per U.S. adult that it has been in 70 years. So how can we turn the growth trendline around?

It all comes down to tax reform.

When was GDP-per-adult at it’s highest? Under JFK and during the years of the Reagan/Bush/Clinton presidencies. What was the common denominator? Tax cuts that spurred investment and kept America competitive with the rest of the world.

Joking about why so many companies are locating their headquarters in Ireland, which – by no coincidence – has the 3rd lowest corporate tax rate of the 35 OCED countries (Organization for Economic Co-operation and Development), Dr. Laffer said it was “because the capital is always Dublin.”

But punny jokes aside, it’s no laughing matter that at 35%, the U.S.’s current corporate tax rate puts Uncle Sam at the top – or rather bottom – of the barrel when it comes to tax competitiveness, as Business Insider recently illustrated. 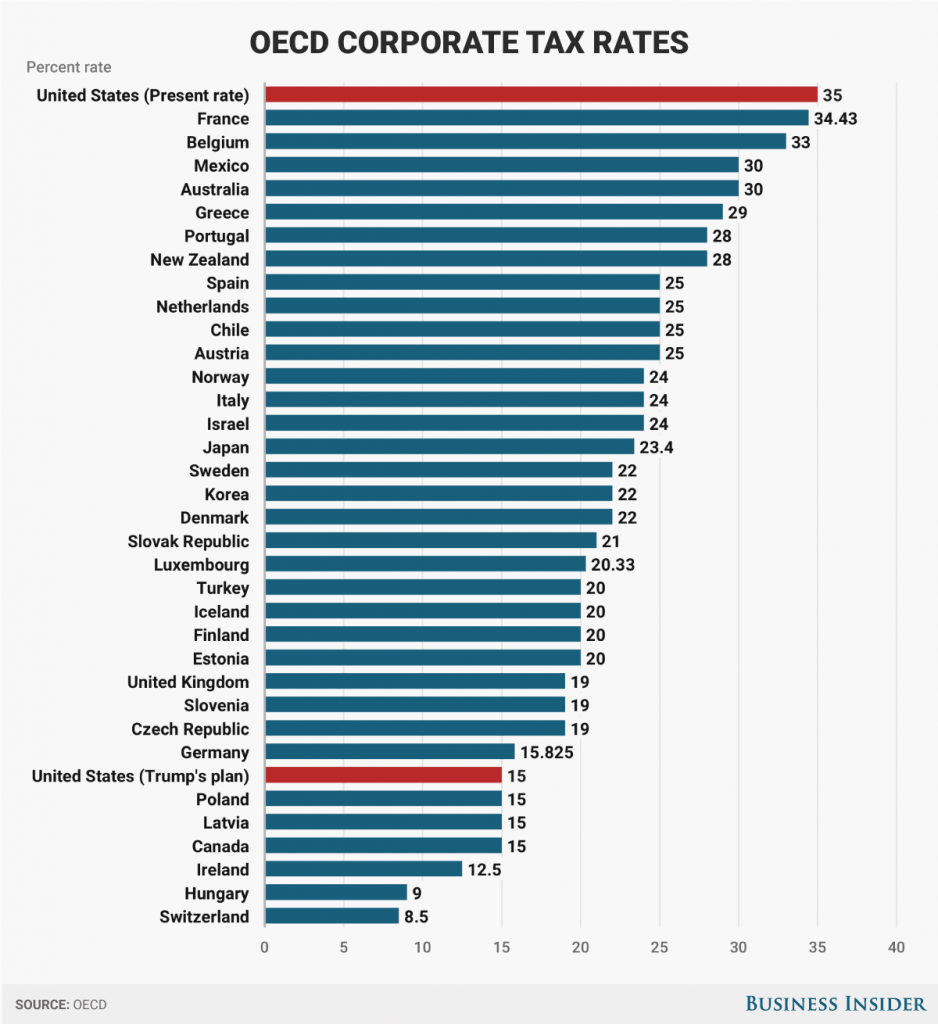 Dr. Laffer went on to point out that bringing down the corporate tax rate would have a significant cascading effect on business decisions that would grow the economy and hence increase tax revenue. These factors are simply not captured in the current “static scoring” models used by most Washington experts to predict the effects of changes to tax policy.

In addition to encouraging companies to move or stay here (which creates more jobs and by extension more taxpayers), a lower corporate tax burden would reduce tax sheltering, change business structuring decisions and lower tax evasion. And that’s before you even consider the secondary and tertiary impacts of more economic activity-generated revenue for state and local budgets, too.

What Does This Mean for South Carolina?

The need for tax reform doesn’t stop at the national level. The single most important thing we could do in the short term to boost South Carolina’s long-term economic competitiveness would be to overhaul our antiquated tax code to create fairness, stability and growth.

The fact is, we are losing ground to our closest regional competitors. Dr. Laffer’s own personal story makes the case.

Looking to escape California’s stifling taxes, he considered moving to one of the nine zero-income-tax states and landed on our nearby neighbor, Tennessee. Why? In the last several years, the Volunteer State has managed to:

While many policy decisions undoubtedly contributed to these successes, the fact is that no income tax – and recently eliminating the “Hall Tax” on dividends and interest – creates the foundation for the thriving economy, and that in turn pays for the services their citizens need.

The Palmetto State should take a significant lesson from Tennessee’s model as we push towards a long over-due reform of our broken tax system. And in fact, we must if we want to stay in the game with our regional neighbors. And that’s just what our Founders intended, when they set up a system of competitive federalism that lets states compete to create the best policy environment for their people.

The Future is Bright

Dr. Laffer closed by reiterating that we’ll never “balance budgets on the backs of the unemployed.” We don’t have to resign ourselves to the current received wisdom that 1-2% GDP growth is just the new normal: pro-growth tax reform is the key to it all.

As he shared to much laughter, President Reagan had the good fortune of following Johnson, Nixon, Ford and Carter…so the economy couldn’t possibly have done much worse under his Administration. With America currently “lying on its back in the basement” of GDP growth, he expressed great optimism for America’s future: we have nowhere to go but up.

LEARN MORE: An Inquiry into the Nature and Causes of the Wealth of States: How Taxes, Energy, and Worker Freedom Change Everything by Arthur Laffer, Rex Sinquefield, Stephen Moore, and Travis H. Brown

Many of us have a story of that special teacher that went the extra mile and poured their love of learning into us.