Late in 2014, headlines heralded the news that America’s official unemployment rate had fallen below 6% for the first time since 2008. Surely, a sign that we’re on the path to recovery, right? A closer look says “not so fast.” After 5 years of unfettered progressive policy in Washington, the reality of the Left’s lofty rhetoric of greater fairness and compassion has been much closer to an all-out mugging of the very people they claim to be “helping.” In fact, a recent poll by the Pew Research Center found that a full 45% of Americans believe the unemployment rate is actually 9% or higher, a sure sign that perception trumps headlines. But a quick look at the real statistics after 5 years of President Obama’s progressive crusade against the rich shows America’s perceptions may be far closer to reflecting reality than the unemployment rate itself:

• According to UC Berkeley economist Emmanual Saez, 95% of the Obama “recovery” gains (in terms of real income growth) have accrued to much maligned “top 1%”.
• 1 in 6 Americans currently rely on food stamps (SNAP), an almost 50% increase since President Obama took office in January 2009.
• According to the Bureau of Labor Statistics, the percentage of Americans who are working is the lowest it has been since the days of Jimmy Carter. As New York Times writer Binyamin Appelbaum aptly said, “We are basically ‘recovering from the recession’ by reducing the share of Americans who participate in the labor force. Hurrah!”

And South Carolina – despite strong overall population gains over the last decade – has been no exception to that trend. The following Palmetto Promise Institute report, produced in collaboration with the Liberty Foundation, starkly illustrates the disturbing truth. From 2008 to the most complete numbers we have in 2013, South Carolina’s labor participation has seen a uniform, steady decline across gender and race, aside from a 2012-2013 rebound among Hispanic workers. 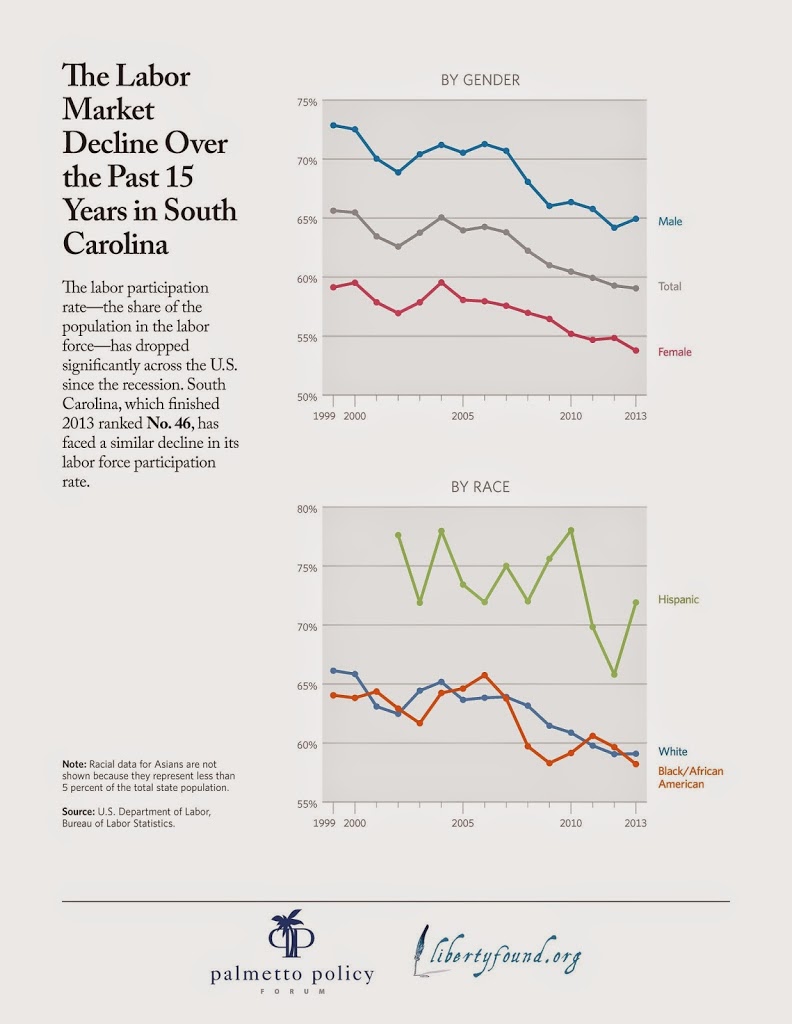