With every new year comes a new round of rankings on every topic imaginable. Apparently tax policy is no different, and its ranking season has begun. Two new state rankings reports place South Carolina among the top finishers in states with the lowest tax rates.

In South Carolina, another significant reason that some pay less is due to exemptions. These exemptions, granted to special interest groups, allow them to pay very little (or sometimes nothing). Meanwhile, those without exemptions are left to shoulder the entire tax burden, bearing particularly high taxes.

So, yes, the average is low, but at tremendous cost to certain taxpayers over others.

The second report by WalletHub actually demonstrates this phenomenon of low averages yet very disparate distribution within property tax. It ranks South Carolina homeowners as having the 6th lowest property tax in the nation.

Meanwhile, South Carolina automobile owners have the 4th highest property tax on vehicles. Unfortunately, in South Carolina most other properties are taxed at the same high rate as automobiles—apartments, rental homes, and small businesses. 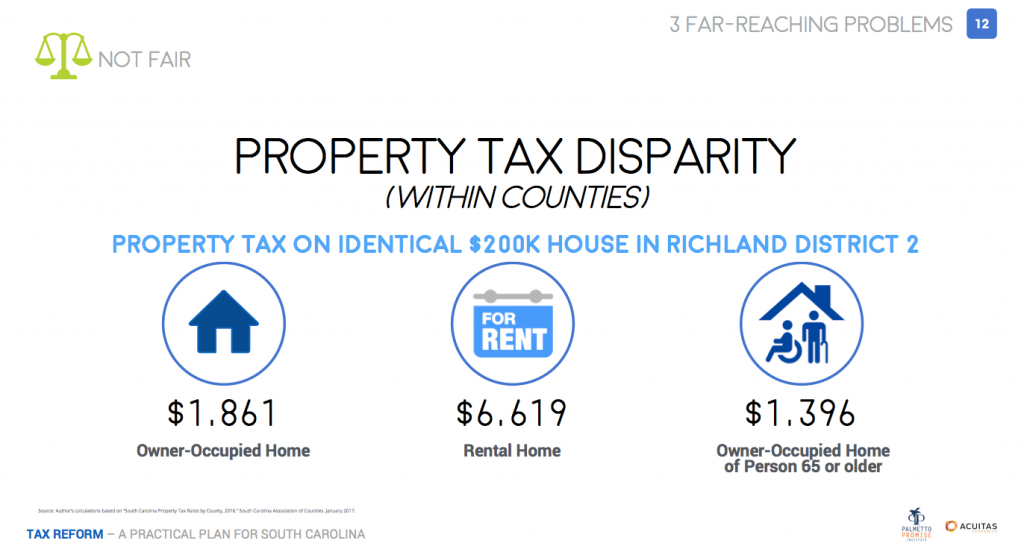 For example, if someone owned a $200,000 home in Richland County, the tax would be $1,861. If someone rented the same home, the tax would be $6,619. Moreover, many properties are either not taxed at all or granted special exemptions, which dramatically lower their rate, while increasing the burden on others.

All these exemptions have significantly eroded our tax base, which continues to shrink every year. As the tax base erodes, higher and higher tax rates are required to maintain revenue and fund state obligations. As rates grow higher, the hardship becomes greater on those who do not have exemptions, which leads these taxpayers to petition for…exemptions, which further erodes the base. This “infinite loop” in which we are currently stuck has created a tax system with low averages and very inequitable extremes—both on the low end and the high end.

Not only is it unfair, it is unsustainable, and stifles our economic growth and competitiveness as a state. Yet, every study which uses averages to rank states (almost every study), consistently concludes we have low average taxes, thus continuing to disguise South Carolina’s tax crisis.