The year is 1866. In response to claims of a giant monster sinking sea vessels, the United States’ government commissions a small ship for a single purpose: find and destroy the unknown creature. Though they locate the sea monster, the crew is unable to kill the beast and discovers that it is actually a highly advanced submarine led by the most famous of captains—Captain Nemo.

The fictional adventures that await the crew are recorded in Jules Verne’s classic 1870 book, Twenty Thousand Leagues Under the Sea. One of the most telling pieces of this famous narrative is how the U.S. government tasks the crew of a single, sail-drawn ship with the unreasonable expectation of locating and killing a giant, ship-sinking sea monster in the vast ocean.

Now fast forward 150 years and we find a less entertaining, but no less dumbfounding true story of sky-high expectations. For decades now, the EPA has saddled states with rules and regulations that stretch budgets and capabilities. But just like the fictional U.S. government in 1866, the very-real EPA hatches unreasonable ideas, wires them to the states, and then disappears come time for the adventure of implementation.

In 2014, states administered 96.5% of all the EPA’s mandated programs. Not a bad record considering the EPA’s federal funding only compensated for 28% of implementation costs, leaving the states to use its own money to cover the last 72%. 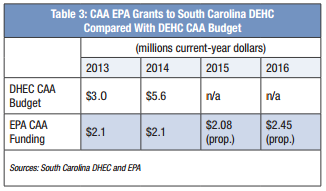 We know these unfunded (or poorly funded) mandates divert money away from projects South Carolinians really need like education and roads. But do they accomplish their goal of reducing pollution? Looking at mandates like the Renewable Portfolio Standards or the ramifications of Rapanos v. United States as an example, it’s clear that the costs of these regulations outweigh the societal benefits.

But the EPA’s actions aren’t just bad policy. The simple fact that the EPA mandates anything to the states is a symptom of a much larger problem.

Among other important ideas expressed in the U.S. Constitution, the Founding Fathers considered competitive federalism a key ingredient to American success. During the New York Ratifying Convention of 1788, Alexander Hamilton spoke of the importance of this governmental structure:

“This balance between the National and State governments ought to be dwelt on with peculiar attention, as it is of the utmost importance…The state governments possess inherent advantages, which will ever give them an influence and ascendancy over the National Government, and will forever preclude the possibility of federal encroachments.”

To put it more plainly, Ronald Reagan described it this way:

“The states created the federal government, not the other way around.”

Federalism works. Federalism protects Americans from overreach from Washington and allows states to both compete and work together to find the best solutions to the problems of our day. Federalism yields amazing results if allowed to function as intended.

Cases such as the EPA’s overreach reveal the unfortunate chipping away of our competitive federalism foundation. By coercing states to do as it mandates, the EPA rips power and money away from the states and transfers it to the federal government. And all in the name of unproductive energy policy.

For the sake of the states’ budgets and competitive federalism, it’s time for Congress and the states to say “no more” to sea-monster-sized, bureaucratic mandates.